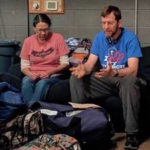 Friday, April 28, 2017 – Prairie City to Pleasant Hill (14 miles) Today promises to be the most difficult of the March: 14 miles in cold, rainy weather along a busy four-lane highway. We’re soaked both from above and below, as trucks barreling along spray us when they pass. It’s a testament to the commitment and perseverance of our group that ten marchers make it every step of the way in such conditions. At our rest stop at the 5.2 mile mark, we decide to break into two groups — one Continue reading → 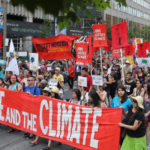