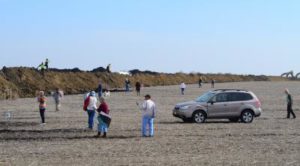 A second person who was arrested last fall for protesting the Dakota Access pipeline has been convicted of trespassing on the work site.

A jury convicted Kriss Wells, 65, of Minneapolis, on the misdemeanor charge after a brief deliberation. Five witnesses, including Wells, took the stand in the trial – three were law enforcement officers who testified about how Wells stepped on to the disturbed soil within Dakota Access pipeline’s easement on Oct. 29, 2016. Wells and Rockwell City landowner Shirley Gerjets testified on his behalf.

Wells and his attorneys said he entered the easement to stop work on the pipeline. Wells, a father and grandfather, said he began learning about climate change, and ultimately protesting against the continued growth of the fossil fuel industry, after his grandchildren were born. His attorneys argued that his concern about the climate created a reason to allow him to enter the property even though Dakota Access has an easement to the land. He also argued that Gerjets, as the landowner, had the right to give him permission to be on the construction site.