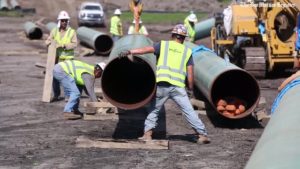 The Iowa Utilities Board has reprimanded the Dakota Access Pipeline for failing to comply with a state order to show that at least $25 million in general liability insurance is in place to protect the public from possible oil leaks and spills.

A Dakota Access spokeswoman said over the weekend  the company has the required insurance in hand. But a pipeline opponent complained Monday that intervention by Iowa regulators should not have been needed to fix the  problem.

“What if the pipeline had broken. Who would have been liable?” said Ed Fallon of Des Moines, a former Iowa legislator who heads Bold Iowa, a political activist group. “I am glad they got the insurance issue fixed quickly, but it never should have lapsed. If you are a driver and your car is without insurance, you don’t get to drive anymore.”

In approving the project in March 2016, Iowa utility regulators directed the Texas-based Dakota Access to maintain a minimum of $25 million in liability insurance for the life of the pipeline. Oil began flowing through 30-inch pipeline, which extends from North Dakota’s Bakken oil patch to Patoka, Ill., on June 1. It has the capacity to transport about 520,000 barrels of oil daily.

On Friday, the Iowa Utilities Board said that Dakota Access had made a filing on May 15 which said it had extended the terms of its insurance policies until June 1. The filing said the company had secured new policies to replace the existing policies, which  “will be filed with the Board as soon as they are available.”

As of last week, no insurance filing had been made, the Iowa Utilities Board said. The pipeline crosses diagonally for about 343 miles through 18 Iowa counties, primarily through farmland.

“It is important that the Board have accurate, up-to-date information regarding the insurance for this pipeline,” the Iowa Utilities Board said. ” Accordingly, the Board will direct Dakota Access to file, on or before June 13, 2017, either (a) the new insurance policies or (b) a detailed report describing the status of the policies and stating when they will be filed.”

Dakota Access spokeswoman Vicki Granado told The Des Moines Register in an email on Saturday that she had confirmed that “all required insurance is in place.” In an earlier statement, she wrote, “We will abide by all rules and regulations that govern our pipeline.”

However, at the end of the business day on Monday no filings had been posted on the Iowa Utilities Board website indicating that Dakota Access had complied with the board’s directive.