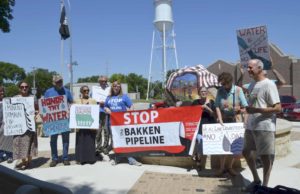 A pipeline protester has been found guilty of trespassing after a jury trial in Calhoun County Thursday.

“This is not an opportunity for you to pass judgment on whether or not eminent domain was right and proper. That’s for another time and another body,” Meth-Farrington said. “This is not a time for you as jurors to make a statement on climate change. That has absolutely nothing to do with whether she had a right to be there.

“The defendant, through her attorneys and the statements she made, is trying to cloud those issues … but the bottom line is she did not have permission to be there from the people who had lawful possession of that piece of property.”

Dakota Access, a Texas-based subsidiary of Energy Transfer Partners, now has completed its pipeline which stretches about 346 miles across Iowa. It was granted the use of eminent domain by the Iowa Utilities Board, to gain easements from landowners like Gerjets who refused to sign voluntary easements.

Pearson said she will consider appealing the decision.

Gerjets told the court that when she spoke with Dakota Access and refused to make a deal with them, they told her, “Good luck fighting big oil.”

“Big oil came into this community and other communities and they ram-rodded it through,” Dutton said. “They pushed it, and they pounded it, and they turned soil. They ruined that soil for generations. They put her water in jeopardy.

Calhoun County Magistrate Andrew Smith agreed with the state’s recommendation, and gave Pearson the minimum fine — $65, or $212.75 after surcharges, plus court costs.

The maximum allowable penalty would have been 30 days in jail and a $300 fine.

It is significant, according to Dutton, that the court took judicial notice of the Iowa Department of Natural Resources’ official position on the dangers of climate change.

That notice means the position was accepted into the record as a fact, as far as the court was concerned, Smith said.

Dutton said it’s significant because such a statement hasn’t been taken under judicial notice by an Iowa court before.

The DNR advises that Iowa is already experiencing the effects of climate change, including extreme precipitation events that lead to flooding and increased spread of pests and pathogens.

Landowners and environmental groups who claim the IUB shouldn’t have granted eminent domain currently have an appeal before the Iowa Supreme Court, after losing their case in Polk County District Court in February.

Two other pipeline protesters have already pleaded no contest to trespassing in Calhoun County, and two more are awaiting trial, Meth-Farrington said.