On February 1, 2020, over 1,000 people marched through downtown Des Moines, from Cowles Commons to the Iowa Events Center, to bring media attention to the climate crisis. Over 70 organizations worked together to make this event happen. It was scheduled just before the Iowa Caucuses to take advantage of the national media gathered here. Various groups concentrated on different climate topics, including extinction, pipelines, natural disasters, and Indigenous rights. See below for media links, videos, and pictures of the parade.

Here’s the video put together by Mom’s Clean Air Force and Karin Stein.

Less than a week ago, Indigenous Iowa and Seeding Sovereignty joined many other co-sponsors at the Climate Crisis Parade in Des Moines, IA. We came together in an attempt to grab mainstream media's attention on the current climate crisis just days before the Iowa caucuses.Seeding Sovereignty organized the indigenous contingent of the march and brought indigenous artist, Remy, to Iowa to construct a wagon with black arrows piercing through it. Indigenous Iowa is a proud cosponsor and played an important role in the event.The words “COLONIALISM” were painted on each side in big, black, and bold letters. Each arrow had words such as reparations, retribution, language, and sovereignty. Remy explains that this is a physical representation of the indigenous response to the lack of media coverage towards not only the climate crisis, but the indigenous people (especially our youth). To see more of Remy's art, go to @f1rstse7venRepresenting for the indigenous youth at this event were Tyler LaMere, an indigneous queer Native woman from the Winnebago Tribe of Nebraska, and Keely Elizabeth Driscoll, a student at the University of Iowa and a tribal member of the Meskwaki Nation. Both delivered hard-hitting, powerful speeches just moments before the parade began. We would like to thank all the drummers and indigenous folx who came to help us make such an important statement. Thank you also to all of our co-sponsors and the organizers.#indigenousiowa#seedingsovereignty#climatecrisisparade#climatecrisis 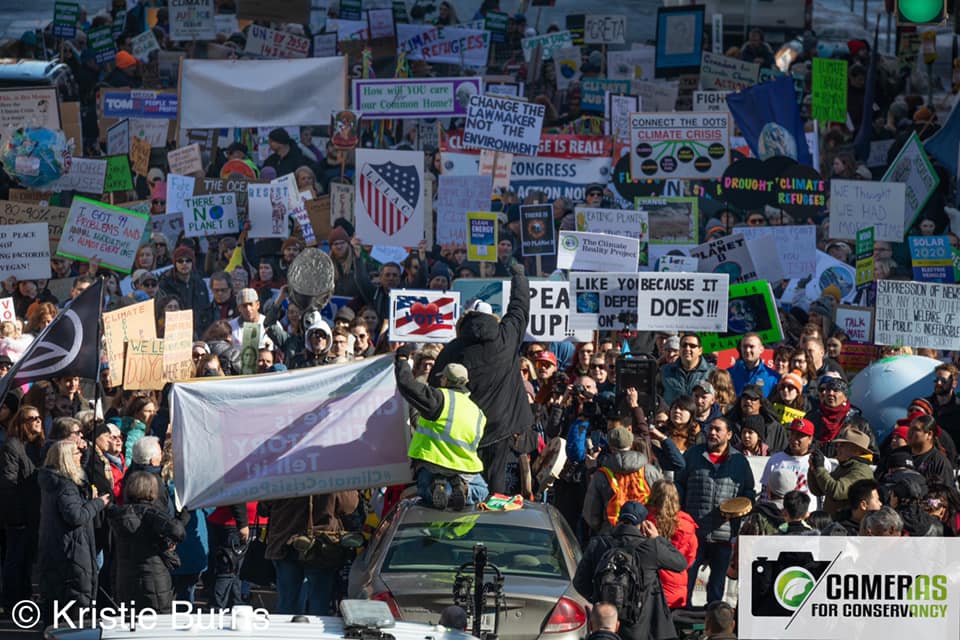 About 1,000 people assembled to hear speakers before the start of the parade. Steve Shivvers (yellow vest) used his car as a stage. Ako Abdul-Samad (in black coat) addresses the crowd. (Photo by Kristie Burns, Cameras for Conservancy) 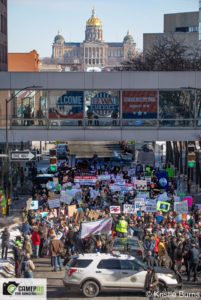 Start of the parade with the Iowa State Capitol in the background. (Photo by Kristie Burns, Cameras for Conservancy) 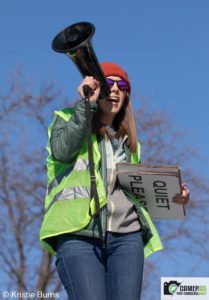 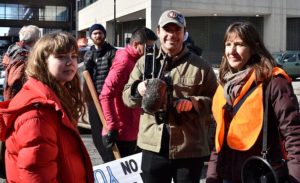 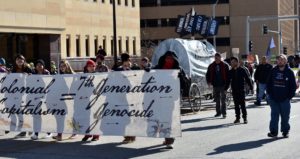 Indigenous leaders from across the Midwest and beyond led the parade. (Photo by Jeff Kisling) 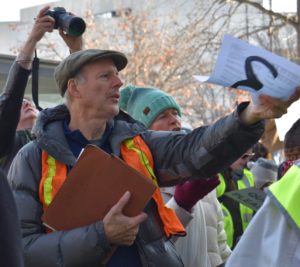 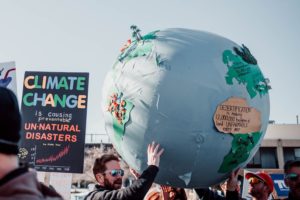 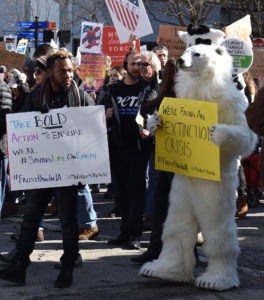 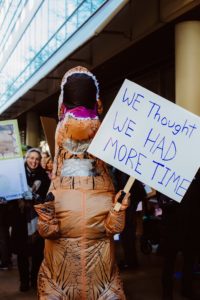 T-rex with an instructive sign. (Photo by Millennials for Climate Action) 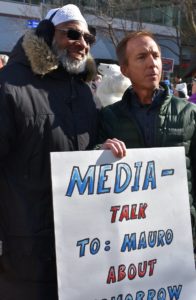 Ako Abdul-Samad with Eddie Mauro at the start of the parade. (Photo by Jeff Kisling) 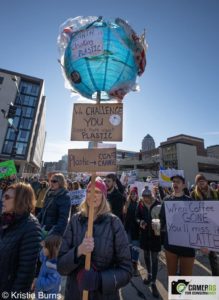 Plastics made from oil are a major part of our climate problem. (Photo by Kristie Burns, Cameras for Conservancy) 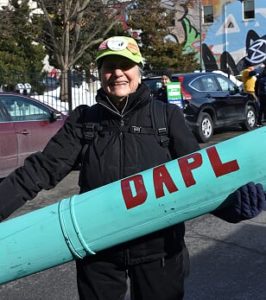 Miriam Kashia of 100 Grannies for a Livable Future with replica of the Dakota Access Pipeline. (Photo by Millennials for Climate Action) 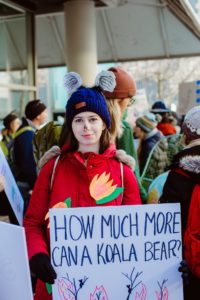 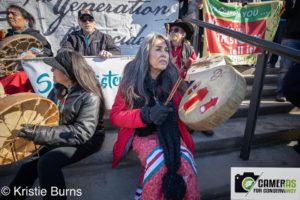 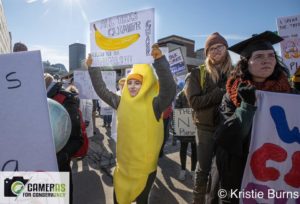 Costumes, signs and messages came in all shapes and sizes. (Photo by Kristie Burns, Cameras for Conservancy) 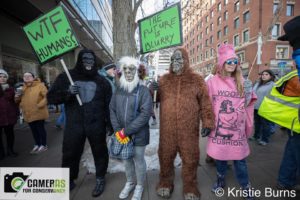 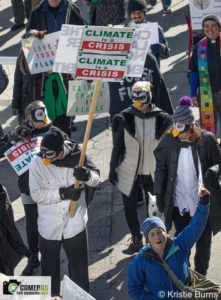 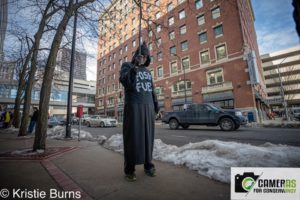 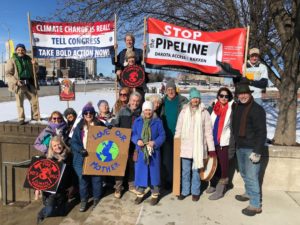 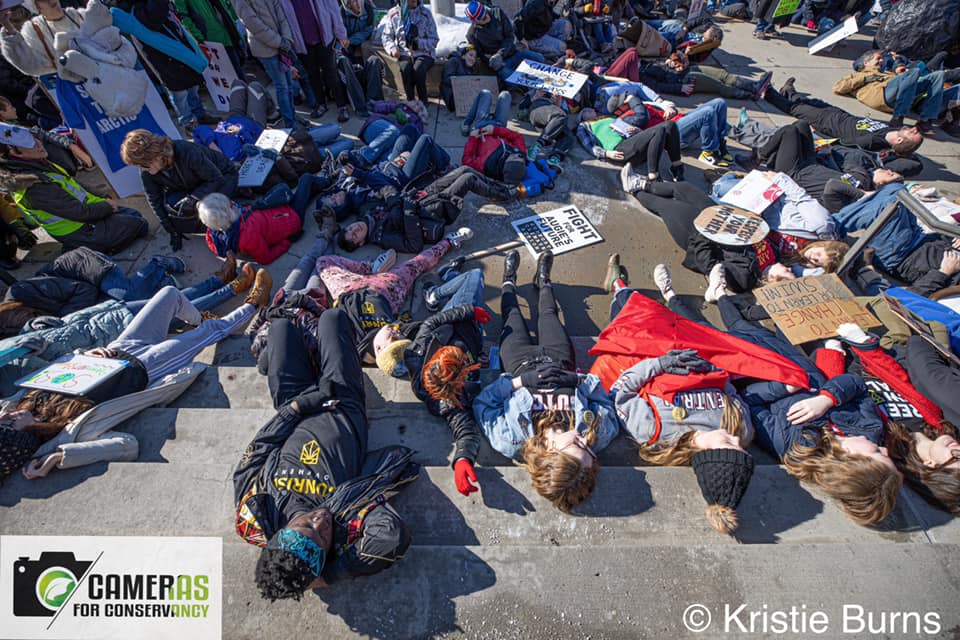 Die in at the Iowa Events Center, symbolizing the threat of extinction. (Photo Kristie Burns, Cameras for Conservancy)