At Urban Dreams, Rep. O’Rourke held a Town Hall meeting. Sam asked him if he was willing to declare a climate emergency, and also for his stance on the proposed expansion of the Dakota Access Pipeline.

There’s no environmentally sound way to exploit, transport, refine, and burn oil. O’Rourke defending his 2015 vote to allow the export of crude oil suggests he doesn’t grasp the urgency of the climate crisis, despite the forward-thinking plan he released this month.
Read O’Rourke’s statements in Ed’s blog: Apology is O’Rourke’s path out of climate contradiction

At the Asian and Latino Coalition event for Beto O’Rourke, Donnielle Wanatee asked O’Rourke, “How do we voters reconcile the fact that you’ve got an ambitious plan to fight climate change, yet you took over half a million dollars from the fossil fuel industry?”

Watch the video for her question in full and his response. Video by Jeannie McCrea.

DES MOINES – Presidential candidate Beto O’ Rouke headlined a panel of Iowans at the Des Moines Public Library for a roundtable discussion on the topic of climate change. This panel took place on the day of a new report by the United Nations detailing the possible extinction of several species, including the closest relatives of homo sapiens (chimpanzees). 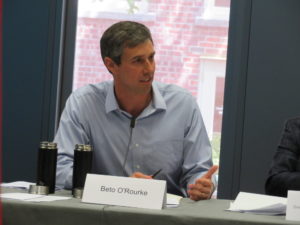 O’Rourke speaking at Climate Round Table. Photo by Shari Hrdina

The panel focused on the state of the environment in Iowa and mentioned recent U.N. reports (in passing but not by name). The assembly included former candidate for Secretary of Agriculture Tim Gannon, Josh Mandelbaum of the Des Moines City Council, lawyer Channing Dutton, former Mayor of Newton Chaz Allen, and representatives for wind energy.

O’Rourke began by speaking of the 50-inch rains in his home state of Texas, wildfires in the southwest, and other calamities taking place in North America. He emphasized “climate change is here and now,” and said it represents the greatest threat to humans, noting that scientists say we must act within 10 years before it becomes irreversible. 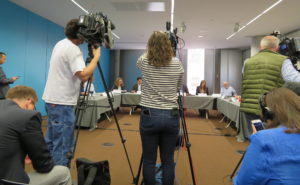 Local and national media covered the Climate Round Table. Photo by Shari Hrdina

His policy proposals include a five-trillion-dollar infrastructure project that would attempt to mitigate the damage. plus a number of proposals from the Obama administration that have been overturned. The majority of his proposals centered on mitigation rather than a direct “carbon free” economy; he did, nonetheless, emphasize support for renewable energies like wind and solar.

Panelist Channing Dutton of West Des Moines noted a study by Iowa State faculty that predicts a 25% drop in the corn yield by 2050 as a result of climate change. He challenged O’ Rourke to support a substantial cut in Pentagon spending that he identified as “part of the problem.” Channing also said that the target of 2050 might be too little, too late.

O’ Rourke responded, in part, that the military itself saw climate refugees as a threat to national security, and there is the threat of military bases going underwater. He identified the civil war in Syria as starting in part because of historic drought pushing the population into crowded cities. Both Dutton and O’Rourke agreed that the U.S. should lead the world in creating green technology and exporting overseas. 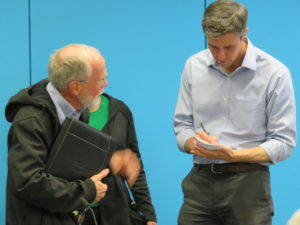 O’Rourke took notes about what others had to share regarding his Climate Plan. Photo by Shari Hrdina

On more than one occasion, O’Rourke referred to remaking capitalism as a solution to the climate crisis. He used the phrase “conscientious capitalism” in a context that referenced the New Deal. (The crux of the New Deal was, to be fair, a response to the collapse of capitalism during the depression; social security and federal job programs that built treasures like the Riverwalk in San Antonio and Red Rocks Ampitheater were socialist).

Note: On the same day as this panel, the BBC reported a U.N. Study on the Global Ecosystem that included the following findings: we rely on nature; nature is in decline and we are threatened, too, as a species ….. and to get back from the brink requires not only all of us refraining from eating red meat but also a legal framework to allow farmers to survive without having to maximize profits utilizing carbon. The latter was also a common refrain coming from the panel in Iowa today.

Listen to audio of O’Rourke from the May 6th Climate Round Table in Des Moines. Introduction by Ed Fallon.
1:15 – Beto outlines his climate plan in a nutshell
5:45 – Is 2050 soon enough?
7:10 – Defense budget vs. climate financing; America leading effort
11:12 – Pre-mitigation investment vs. disaster clean-up

Steve Veysey says, “Beto spoke about many things. Climate crisis was last and the best part of his stump. I got the first question: ‘When you are president you will be the most powerful leader in the world. Will you commit now to solving the climate crisis as your first and highest priority?’ His answer was ‘Yes’. Unfortunately we did not get the question and answer recorded. A bit later another climate question was asked that actually referenced my question. I did get that response recorded.”

Notes from Mark Clipsham: “It was well attended as I had foreseen. Good sign on one hand, disappointing on the other as it is a kind of blind loyalty. He had a lot of good things to say that I agreed with and climate change was a big part of his shtick, which played well to the audience. I got to ask my question. He had just been talking about $4T in infrastructure spending, renewable energy and a strong growth economy. $4T could go a long way towards replacing our transportation system instead of institutionalizing it. Our current system is an environmental disaster, and very profitable.

“My question was to the effect of, ‘How can we reconcile the fact that the economy is maintained and grows at the expense of the environment. Renewable energy does not keep the landfills from filling up, the water from being polluted or people from being fat and unhealthy. The growth economy is what is killing us.’ He had said the free lunch was over in his speech and then said there was a green buffet of growth waiting for us. We can have our cake and eat it too. Simple math says this is not realistic. We really don’t need much to be happy and healthy, but that does not support a growth economy. Simply put, paradise is not profitable so we create problems to solve profitably, such as our dinosaur transportation system’s infrastructure. It grows bigger and hungrier very day.

“As a transition the strategy is okay, but it sure isn’t the answer. We don’t really have the time for politically palatable solutions (kicking the real issue cans down the road) is my understanding. If we don’t shut it down, climate change will pick up exponentially. Once it really kicks in, it will be unstoppable because of factors like the release of locked up methane from the arctic and all. Fewer people will go a long way to lessening the problem but it would be ideal if it was a policy than a result of poor policy.”