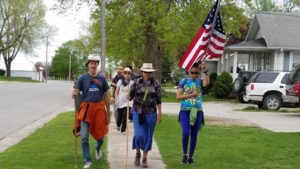 In a world filled with conflict, an eight-day walk across Iowa aims to encourage the opposite all while talking about the earth’s climate – a sometimes controversial issue.

The Climate Justice Unity March is an eight-day walk starting at Little Creek Camp in Williamsburg and ending in Des Moines on April 29 for the People’s Climate March at the Iowa State Capitol. It is being held by Bold Iowa, an environmental and land protection group.

Over 25 people a day will be walking along F-52 to reach Des Moines, with the goal of finding common ground  among Iowans on how to move forward and address climate change.

“Part of our genetic code is when there’s a crisis, we walk,” said Ed Fallon, director of Bold Iowa. “We’re in crisis, both in terms of climate and in terms of our government and discourse. This is a chance to enact a rather primitive ritual that indicates the urgency of the moment.”

Every evening,  marchers will stay in a town overnight. There will be a forum, dinner and music to invite conversations about climate, Fallon said.

He said he hopes to see conversations between people like rural and urban Iowans and environmentalists and farmers.

Fallon said there’s a need for common ground between people to move forward with impactful change for the earth.

“We have to stop demonizing people who don’t agree with us on what’s causing climate change,” Fallon said. “If someone’s going to tell me it’s cyclical, I’m willing to have that conversation.”

The march will make it to each town at 5 p.m. every evening.