Late yesterday afternoon, Heather Pearson was found guilty of trespass for her brave stand against the Dakota Access Pipeline last fall. Among the many hats she wears, Heather is Bold Iowa’s Director of Rabble Rousing and is never shy about leading songs or chants during rallies and marches.

Yesterday, seated with her attorney, Channing Dutton, in a courtroom in Rockwell City, Heather comported herself with dignity and clarity on the witness stand and talking with reporters after the verdict was read.

Here’s the press release sent out this morning by Bold Iowa and the Bakken Pipeline Resistance Coalition. Please share it with others, and let folks know that this pipeline fight is not over. Heather plans to appeal yesterday’s ruling, and three other pipeline fighters have cases coming up, all in Calhoun County. They are Kriss Wells, Emma Schmidt and Mahmud Fitil.

Over the lunch hour, a brief press conference was held in front of the Freedom Rock on the north side of the Courthouse. Click here to view video. Reporters from three local and regional papers — The Fort Dodge Messenger, The Storm Lake Times and The Calhoun County Graphic-Advocate — were at the trial for its entirety. Click here to read The Messenger article, and we’ll post the others as they’re available.

In terms of our options for justice, there’s also the lawsuit involving nine landowners and the Iowa Sierra Club, now before the Iowa Supreme Court. More on that soon.

So to those who say, “This fight is over,” today’s trial is more evidence that it’s not even close. – Ed

Rockwell City, IA — Heather Pearson, a resident of Logan, Iowa and a Dakota Access pipeline opponent who was arrested on October 29, 2016 during nonviolent direct action to stop construction of the Dakota Access pipeline on Shirley Gerjets’ property in Calhoun County, was found “guilty” yesterday in a jury trial. Gerjets, age 82 and a life-long farmer, remains an outspoken critic of the pipeline, which crosses her land and includes a valve station that permanently removes farm ground from production.

“The result today is difficult to understand,” said Channing Dutton, Pearson’s attorney. “We had a great client and an excellent judge. There is no way the prosecution proved its case. This is the power of a big corporation using local law enforcement to arrest good people whose only crime is their commitment to protect our climate future and stand up for landowner rights. We’ll soldier on. There will be another day.”

Pearson plans to appeal the decision. On the stand, Pearson stated, “Why should we have to put our air, our water, our land, and our climate at risk so some private company can get rich running oil through our farmland. They’re not only stealing our land, they’re putting everything we need to survive at risk.” 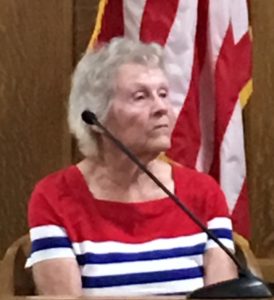 Landowner and farmer Shirley Gerjets took the stand and told how she did everything she could to stop Dakota Access from taking her land. “I kicked those Dakota Access surveyors off my land I don’t know how many times. It was sickening the day it started. Their pickups drove through my corn, then they chopped it all down, and then the bulldozers came and messed up the topsoil. This fight has cost me lots of money and many, many sleepless nights. An agronomist told me we’d never get the land back to the way it was. As far as I’m concerned, it’s this pipeline that’s trespassing, not Heather.” 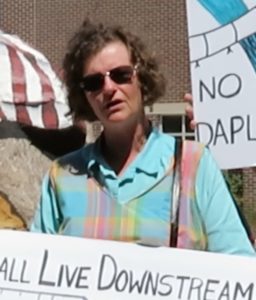 “This court case illustrated how Iowans continue to stand together against an out-of-state corporate oil pipeline that risks our livelihoods, property rights, health and water,” said Brenda Brink of the Bakken Pipeline Resistance Coalition. “Another thing that’s become clear in this trial is how the pipeline company expected local law enforcement to do whatever it wanted, regardless of the costs or other needs of the community.”

“We’re deeply disappointed in the jury’s decision,” said Bold Iowa director, Ed Fallon. “Jurors got stuck on the side issue of trespass, ignoring the justification for Heather’s action. This pipeline impacts Iowa farmers, landowners and all people concerned about our land, water and climate. When our politicians fail us, as they have, civil resistance is the historically appropriate response.”