Bold Iowa bird dog Osh Anderson asked Kirsten Gillibrand to make climate more prominent on her website, instead of hard to find under issues. Gillibrand said she had just made it more prominent on her website. She continued to explain some of the actions she would take to address climate, such as passing a Green New Deal and putting a price on carbon. 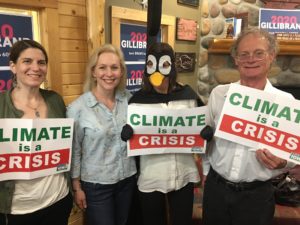 Our intrepid bird-doggers talked to Gillibrand about making the Climate Crisis more of a priority and move the issue to the top of her list. By the next day, she had moved Climate Change to the number one issue under her “Restoring our Values” section of her webpage. We were a little confused about the placing of the issue (restoring?huh?), but she did try to do something to make the issue more obvious. 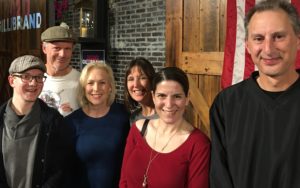 Commendably, Sen. Gillibrand began her speech by talking about the tragic, historic flooding in SW Iowa — and she made the climate connection! But notice in the video, below, that she says she’ll talk more about climate change during her speech. She doesn’t.

When we talked with her after the event, she emphasized that climate was indeed her top concern. Yet we didn’t get that impression from her speech, since she only mentioned it at the very beginning, and then when it came up as a question.

To sum it up, while we like what Sen. Gillibrand had to say, if she’s serious about climate being her top concern, she’ll have to make it a stronger component of her presentation going forward to convince us.

Attendees say the event venue was too small, and it was difficult to get in. Not all of our bird-doggers could even find each other. David Merchan writes, “She’s not my favorite candidate, however she said all the right things, especially about the Green New Deal. I think that’s a win, as the more candidates who talk about GND and push the conversation to the left, the better chance we have of getting bills like GND passed. I was going to ask her about the Dakota Access Pipeline, and whether she would accept fossil fuel money in her campaign, but the event venue was such a tight space I couldn’t pull it off.”