Our bird doggers asked Governor Hickenlooper if he would participate in a climate debate. 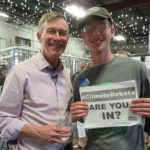 Hickenlooper says climate change is a serious issue but the crisis isn’t prioritized in his campaign. He deflects to his top priority: bringing people together.

In response to a question by Karl Knock, Hickenlooper insisted that “fracking doesn’t cause earthquakes.” That’s pretty disappointing, and if you listen to the rest of his response, it feels disingenuous.

One comment we didn’t capture was when Hickenlooper said he drank fracked water because, after an oil executive drank it, and he didn’t want to offend the guy by not drinking it himself. For real.

John Hickenlooper in Iowa: The case for a moderate problem-solver