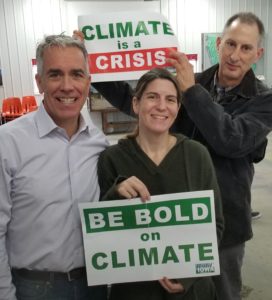 Sam and Todd went to Polk City to see one of the few Republicans running in the Republican primaries, Joe Walsh. Walsh doesn’t have the best history when it comes to environmental issues, but he has repeatedly said during his campaign that climate change is a major problem that we have to do something about. Sam asked him how he expects to get Republicans to do something about the Climate Crisis since they either believe it is a hoax or not man-made. Watch his response below.

Me?? Talking to a REPUBLICAN primary candidate?? Who believes Climate Change is REAL? At an event hosted by an organization that teaches people how to do small-scale organic farming?? Well that's just odd all around…