Sid reports: “He has two proposals in his speech–host a climate accord in the US and retrain fossil fuel workers to work in the green economy. After the stump speech, as he was working the room again, I told him that he needed to put his climate change policy on his website. So far, he hasn’t done that yet.

“My thoughts are, it’s good he has a plan and includes it in his stump speech, but it’s a pretty weak plan, and he’s not even making it a major plank on his platform, let alone the priority that it needs to be.”

The following video has two parts. The first is the section of his stump speech about climate, and the second is Sid talking with him one-on-one. Because of the noisy crowded room, his responses are hard to hear.

Steve Veysey writes: “I was able to ask Representative Swalwell about his stance on addressing the climate crisis. I basically got his stump response. I’m not certain how deep his conviction is, or whether he is just touching the ‘climate crisis base’. I wish now that I’d pressed him on that point, since this was a face-to-face interaction.”

Kathy and Ed both spoke with Mr. Swalwell as he first arrived at the event, but the video they shot of that conversation didn’t turn out well. Margaret was able to ask a question during the formal Q&A portion of the program about how to elevate climate to the most imminent crisis we face. Swalwell talks about the importance of making sure people know the difference between climate and weather, which President Trump likes to confuse people about.

Kathy then asks him about the Dakota Access Pipeline. He’s sympathetic to the pipeline worker, and feels our challenge is to transition workers to green jobs, we’ll lose those workers. Kathy points out that if the Iowa Supreme Court rules in favor of landowners and the Iowa Sierra Club in their lawsuit against DAPL, removing the pipeline will create some jobs.

Samantha and Diane visited with Eric Swalwell at the Working Hero Iowa forum organized by JD Scholten at the Iowa City Public Library. Sam writes, “According to Swalwell, the world is currently in ‘survival mode’ in regards to the climate crisis. He stated he would not put ‘a single federal dollar’ toward new pipelines and he’s against eminent domain when it comes to pipelines and Trump’s border wall. He also talked about pipeline/oil workers, how they are not paid enough, and how we can bring them to our side with better pay and more stable work through technology and green jobs. He says that green technology will help bridge the divide.” 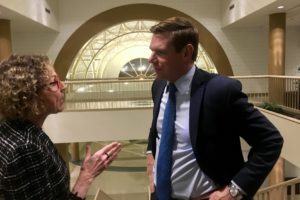 Susan and Mark Leonard spoke with Congressman Eric Swalwell (D-CA) at the Sioux City NAACP Freedom Fund Banquet. “I acknowledged that Mr. Swalwell has expressed his support for the Green New Deal and asked if he would declare a climate emergency on his first day in office,” wrote Susan. “He did not say that he would declare a climate emergency but did say that he’s supportive of 50/30 – 50% renewable energy by 2030 (which I think is too little, too late). He suggested that if we have a Democratic majority in both Houses we could pass legislation to deal effectively with climate change without declaring an emergency.

“I also asked about the Dakota Access Pipeline (DAPL). I told him that DAPL has been our biggest climate story in Iowa and asked if he would shut it down if elected president. His answer was a deflection. He talked about how important it is to provide training and jobs in renewable energy, especially to help people who will lose their jobs as we transition out of fossil fuels. He made a good point, but it wasn’t really an answer to my question.”