Ed asked Sen. Harris why the climate crisis isn’t everyone’s top priority, comparing the urgency to one’s house being on fire. Harris talked about her history of fighting major polluters in California and in Washington, DC, and about the importance of environmental justice. Unbeknownst to her audience, this was Harris’ last campaign event before dropping out of the race the next day.

Kathy and Ed went to Harris’ Urban Dreams block party. In a lighter moment, Ed “saved” Senator Harris from a bee that was buzzing around her and then landed on her microphone.

And here’s a clip from Harris’ speech where she talks about climate. 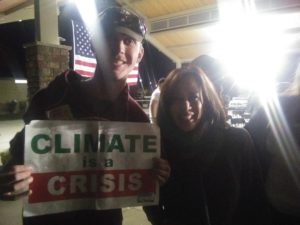 Shaun reports: “I think the Harris event went well. Afterward, I asked if she opposes doubling the flow of the Dakota Access Pipeline, and she said yes. She also mentioned a few things on her climate stance related to that, including opposition to taking land through eminent domain.

“I also got video of her answer to a young girl’s question about reducing our dependence on fossil fuels. I thought Harris did a great job of explaining our planet’s situation, the crisis, her solutions, and policies to resolve it.” 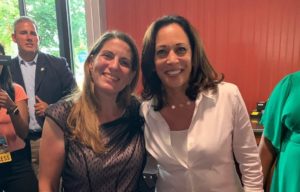 Afterwards, Harris also discussed with Samantha the problems regarding Iowa’s drinking water and the health challenges Iowans face due to chemicals seeping into wells.

At a meet and greet in Indianola, 500 people showed up to listen to Kamala Harris’s proposed presidential policies. Unfortunately, she did not mention climate change during her speech. When later asked about the climate crisis, she replied that it was an existential threat. She would reenter the Paris Climate Agreement and supports the Green New Deal.

Ed was quoted in the New York Times.  Unfortunately the paper edited out Ed’s comment about climate change:

Ed Fallon, a commentator on Iowa politics who has been “bird-dogging” candidates — as he put it — for 32 years, thought Harris did well to talk about climate change. But he was not fully satisfied with what he heard. “Mentioning climate change and prioritizing it are two different things,” Fallon said.