Bold Iowa supporter and long-time climate activist, Channing Dutton, hosted a meet-and-greet event for Tom Steyer at his house. Climate bird dogs Kathy Byrnes and Ed Fallon attended, along with about 75 other people. See video below as Kathy asks Steyer a question about farmers and the climate crisis. 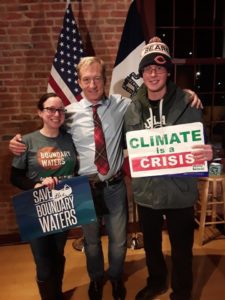 Bold Iowa Climate Bird Dog Shaun Ahern attended Tom Steyer’s town hall in Newton. Here he is in a picture with Steyer (Ed’s favorite climate change candidate) and Michelle Bruggenthies from Boundary Waters Action, a group that is trying to stop mining in the Boundary Waters Canoe Area. If only we could somehow get more environmental activists polled so Steyer is on the debate stage on January 14th–then we would know for certain that the Climate Crisis would be discussed during this particular debate! See footage from Steyer’s Town Hall in Newton below:

Steyer was a guest on The Fallon Forum. It’s encouraging that Steyer’s top priority is climate change and that he’s had a strong track record over the past decade working to mobilize Americans to take action. 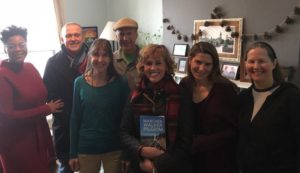 Tom Steyer’s wife, Kat Taylor, and several Steyer campaign workers joined the staff of Bold Iowa for a tour of Birds & Bees Urban Farm and a delicious meal almost entirely from the garden, prepared by Kathy. We were very impressed with the work she and Tom are doing regarding regenerative agriculture at their experimental ranch in Northern California. Kat later mentioned her tour of the farm in an op-ed piece she published in the Sioux City Journal. Click the following link to read about Kat’s experiences meeting with particular Iowans in order to discuss the Climate Crisis and the environmental issues affected the region: https://siouxcityjournal.com/opinion/columnists/other-voices-kat-taylor-rural-america-can-and-should-lead/article_68ed38c9-fb46-5e6c-9ce6-1fb7fa0b688d.html

Tom Steyer was the featured guest on CNN’s town hall. Steyer talked about climate change a couple times, describing it as his #1 priority. Steyer also stated his opposition to oil and gas pipelines. Kathy and Ed spoke with him briefly after the town hall. 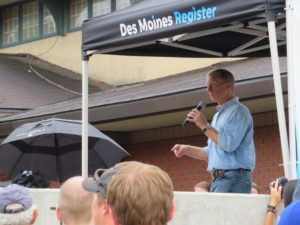 Tom Steyer speaks at the Des Moines Register’s Soapbox at the Iowa State Fair on a rainy Sunday morning.

Shari Hrdina reports: “I knew almost nothing about Tom Steyer other than he was rich, and at one point put his money behind the climate crisis, then impeach Trump, and now running for president.  When I heard him at the Iowa State Fair, I was impressed with his grasp of the climate situation.  He seems to deeply understand what is going on.

“As his handlers were rushing him away after talking on the soapbox, he was not answering questions as he walked.  As he was zig-zagged through the crowd, at one point he was headed right in front of me, and I shouted if he would participate in a climate debate.  He nodded in my direction.”