Twenty years ago, I began saving seeds from my garden. I now save about fifty heirloom varieties annually. It’s encouraging to see more people understanding the importance of seed preservation, because as our Earth plunges deeper into the New Climate Era, saving heirloom seeds is likely to play a key role in humanity’s ability to adapt and survive. 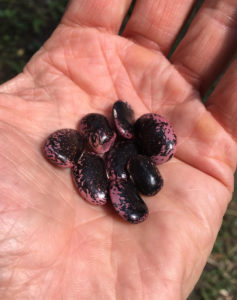 One of my most treasured seeds is the Scarlet Runner Bean, with its purple-and-black beans and beautiful red flowers. I’ve meticulously kept a line of Scarlet Runners going for nearly a decade, and I’m careful to never plant more than half of what I’ve saved.

Well, almost never. Last year’s Scarlet Runner crop did poorly. I was only able to save a couple dozen seeds. For reasons I’ll never understand, this spring I abandoned caution and planted all of my remaining Scarlet Runner seeds.

To my dismay, none of those bean seeds germinated. A line of seed I’d saved for nearly ten years was gone. 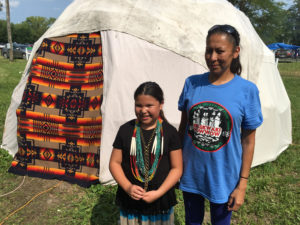 Donnielle Wanatee and her daughter Lovena in front of their family’s wiki-up at the Meskwaki Powwow.

In June, Donnielle Wanatee and her daughter Lovena visited the urban farm at our home in Des Moines. While Lovena helped Kathy pull weeds, Donnielle told me about “Braiding the Sacred,” a gathering she’d just returned from in upstate New York. (Braiding the Sacred is a growing network of Indigenous corn keepers whose work centers on ancestral corn varieties and the sacred responsibility to care for them.)

One of the leaders of Braiding the Sacred, Angela Ferguson, heard of a man who’d carefully maintained 1,100 different Native seed varieties. The man unexpectedly gifted the entire collection to Angela! In that collection, Angela found seven corn seeds from the Meskwaki and Sauk-and-Fox. She gave some of each of those to Donnielle. 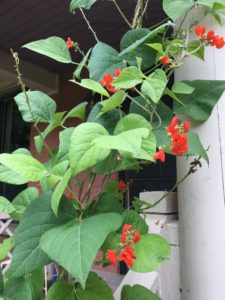 In addition to those corn seeds, someone at the gathering gifted Donnielle a few bean seeds, a variety called “Bear Paw.” As Donnielle and I sat on my porch, she showed me each of the Meskwaki corn seeds given to her by Angela.

Lastly, she showed me the Bear Paw Bean seeds. My jaw dropped! It was the exact same seed as my Scarlet Runner Bean!

Donnielle gave me sixteen of those seeds. The very next day, Kathy and I planted eight of them. The plants are now over ten feet tall and thriving like none I’ve ever planted before. 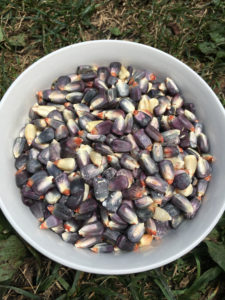 Maybe this seems like a trivial matter, but to me the experience was an example of how mysteriously yet graciously spiritual forces within our world come into play.

How odd for me to plant every last one of my Scarlet Runner seeds.

How odd that not even one of those seeds germinated.

How odd that, barely a month later, a Native friend shows up at my door with the exact same seed.

Is it odd, or simply the way the Universe works? I don’t know. But for me, saving heirloom seeds is both logically and intuitively one of the most important tasks we can do. It’s one way we stand up to the forces that continue to push us into a climate future that is dangerous and foreboding, into a reality that negates all that is alive and beautiful.

In addition to all the other important work Donnielle does, I’m honored to march with her on the First Nation – Farmer Climate Unity March.  “I’d like Iowans to start having the conversation that no one should have to leave this state,” Donnielle told me. “We should all be able to live together. This is what the March has the potential to bring about. We have to start working together because a rising tide raises all ships, and that’s what I’m trying to do with my Iowa.”