Walking sticks in hand and raincoats wrapped around their waists, about two dozen people embarked Saturday on an eight-day trek that will take them nearly 100 miles from Des Moines to Fort Dodge.

The First Nation-Farmer Climate Unity March, organized by the environmental advocacy groups Bold Iowa and Indigenous Iowa, is said by organizers to be show of unity by opponents of the Dakota Access Pipeline.

“It could lead to a potential break and poison our water,” Regina Tsosie, co-founder of Sage Sisters and president of the Native American Coalition of the Quad Cities, said of the pipeline. “But it also has desecrated our sacred sites.”

Tsosie’s remarks came as a group gathered outside the Iowa Utilities Board office early Saturday morning for a short pre-march meeting. Some in attendance held large signs with messages including “Stop eminent domain abuse” and “Protect our future generation soil and water.” 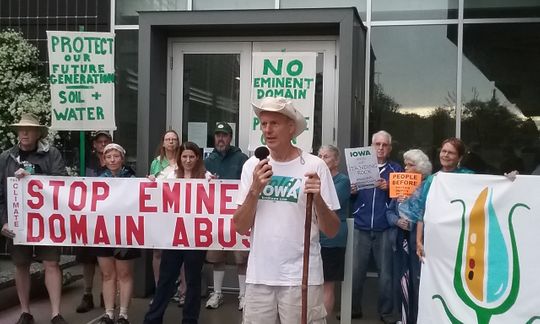 Ed Fallon, of Bold Iowa, speaks outside the Iowa Utilities Board office prior to the beginning of the First Nation-Farmer Climate Unity March. The march route will stretch nearly 100 miles across 8 days. (Photo: Ian Richardson/The Register)

The group then drove to Birdland Park to officially begin the march. Members plan to walk 10-15 miles per day and conclude their journey in Fort Dodge on Sept. 8.

Ed Fallon, who heads Bold Iowa, said he believes the number of participants will grow as high as 50 during points throughout the week.

“I’d say half of that group are on for the entire march, but there are people coming and going,” he said.

The $3.8 billion Dakota Access Pipeline runs nearly 1,200 miles through North Dakota, South Dakota, Iowa and Illinois. Built by Texas-based Energy Transfers Partners, it has been running since June 2017 and has a capacity to transport about 520,000 barrels of oil daily.

The marchers’ route will travel through four of the 18 counties where the pipeline runs in Iowa and the group will cross back and forth over the pipeline a number of times in three of those counties, Fallon said. The group plans to interact with landowners and hold nightly discussions.

Fallon said the march is also a show of solidarity with the Sierra Club and Iowa farmers who have appealed to the Iowa Supreme Court over the state’s decision to authorize the use of eminent domain for the pipeline project.

Marchers will camp at farms and parks using a trailer designed with environmental-conscious bathroom facilities and solar-powered showers. The first night’s stop was Griffieon Farm in Ankeny. The march will end the afternoon of Sept. 8 at City Square Park in Fort Dodge.

Outside the Iowa Utility Board office, Indigenous Iowa founder Christine Nobiss said she hopes the march sends a message to the state regulator.