As I pack up my tent this morning, Sarah informs me that she woke with a pit in her stomach, an odd sense of foreboding. She’s spoken with Shelley Buffalo and Fernando Manakaja as well, and they also have the same sense of unease — an intuition that someone or something may try to harm us today.

I take their intuition seriously. Our marching column is tight, and we walk two-by-two on the gravel shoulder — where it exists. Sometimes there is no shoulder, and we walk single file along the white line marking the edge of the pavement.

I stay up front to the right of my walking companion and employ my broad, sweeping, sustained wave with every vehicle that passes. Most drivers are respectful, slow down if necessary, and move partially or completely into the left lane. Some wave back.

Less than a half mile outside Lynnville, the driver of an over-sized white pick up truck floors his engine as he passes. He turns around a short ways beyond us, makes another sweep and again floors his engine. His intent is clearly to frighten and intimidate. 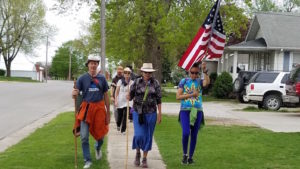 During our break in Lynnville, I discuss the incident with Sarah and Shelley. I suggest we carry the American flag at the front of our column. “We have an American flag with us?” asks Sarah, a bit surprised that, as the logistics director, I hadn’t told her.

I apologize, and tell her I’d thought to suggest we carry the flag while we march, but was concerned that some of our marchers would be opposed.

Sarah finds the flag and fastens it to a pole with zip ties and duct tape. Shelley insists that the Native people on the March be the ones to carry it. She and Donnielle take turns at the front of the column while I walk behind them and wave to passing vehicles. The response from drivers is noticeably different. They are more respectful, wave back. Some smile. We feel distinctly safer, and I’m relieved that we’ve found a way to connect immediately and powerfully with our vehicular audience.

Yet as suspected, two marchers are upset. That night after dinner, we discuss the decision to carry the flag. One marcher who is upset describes the flag as the quintessential symbol of American imperialism. He says he was embarrassed to walk behind it.

The Native people on the March speak strongly in defense of our decision. “As Native women carrying this flag, we’re commandeering the narrative about what it symbolizes,” says Shelley. “Native Americans have served disproportionately in the armed forces under this flag. To me, it represents liberty, self-governance, personal autonomy and freedom — all values taught to the colonists by the Natives of the East coast in whose social and governmental constructs, these values were institutionalized.”

We resolve the flag dispute after much conversation, some of it heated. Already, in just four days, other conflicts have arisen on the Climate Justice Unity March, and I am reminded that unity begins at home. Even among a small group of committed activists passionately dedicated to a common cause, striving for and maintaining unity is an ongoing challenge.