In the fight to save all that we know and love from climate chaos, it sometimes may seem like we’re spinning our wheels. Yet every once in awhile, Energy Transfer, the corporation behind the Dakota Access Pipeline (DAPL), will let slip a truth that lets us know we truly are making a difference. 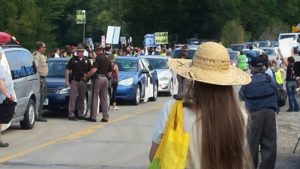 Here’s a message I received recently from a landowner along the route of DAPL:

“Bold Iowa must apparently be near the top of  DAPL’s most formidable opponents list. Their attorneys wanted to avoid a trial over a land dispute, and one of their initial conditions to settle was that I be gagged from criticizing them publicly. They specifically mentioned a concern that I’d be quoted in Bold Iowa’s blog. I think it’s fair to assume they must see you as quite a threat.”

That reminded me of what Energy Transfer’s security firm, Tiger Swan, wrote about Bold Iowa in a series of revealing articles published by The Intercept in 2017:

“Bold Iowa’s BAT tactic was unfortunately successful today. Work was stopped at several sites and used up a lot of our resources…If the lockdown tactics of Mississippi Stand and the BAT tactics of Bold Iowa were to join forces it would severely impact our mission.”

Thank you, Energy Transfer, for reminding us that what we do has an impact. That fact was again on display during the Packers – Seahawks playoff game last weekend. Energy Transfer aired this ad: A World Without Pipelines.

Clearly, the communications to the Iowa Utilities Board (IUB) from Bold Iowa, the Iowa Sierra Club, the Northwest Iowa Landowners Association, and many of you have not gone unnoticed. Energy Transfer wouldn’t waste money on pricey ads like this if it felt we posed no threat.

Of course, the ad is full of lies. The US is the world’s largest oil producer and on track soon to be the largest exporter. When the ad refers to “America’s oil and gas” and “our energy needs,” what Energy Transfer is really talking about is expanding its own export market and profit margin at OUR expense.

So please, keep fighting. Keep speaking out. Continue to write the IUB in opposition to the proposal to double the flow of oil through DAPL. Continue to bird dog presidential candidates about the climate crisis and related concerns. And come to the Climate Crisis Parade on February 1st.

Together, standing strong and united, we continue to make a difference.