Dressed in black and wearing adult diapers, Bold Iowa supporters were arrested while holding a sign that read “Climate Denier in the White House scare the S#*T outta you? IT DOES US!”

DES MOINES, IOWA — The Climate Defenders Five (Todd Steichen, Martin Monroe, Miriam Kashia, Kathy Byrnes, and Ed Fallon) will appear before a judge on Thursday, September 5 at 2:00 at the Polk County Justice Center, Courtroom #110, 222 5th Avenue, Des Moines, IA 50309. At 1:30, they will hold a press conference outside the building. 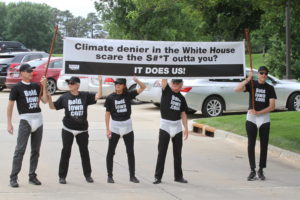 Earlier this summer, President Trump visited Hy-Vee’s Ron Pearson Center in West Des Moines for a GOP fundraiser. Thirty Bold Iowa supporters called out the president’s climate denial to the donors who came to support him. Protestors blocked one of the entrances to the facility’s parking lot. Later, five carrying a banner approached the building, hoping to enter and bring their urgent message to the attention of president and his supporters. At that point, they were arrested by West Des Moines police for simple misdemeanor trespass.

“Given the absolute urgency of the climate crisis, we felt totally justified to be there and to justifiably confront Republican donors and the President himself to take action to address climate change, before it’s too late,” said Miriam Kashia of 100 Grannies for a Livable Future, one of the five arrested. 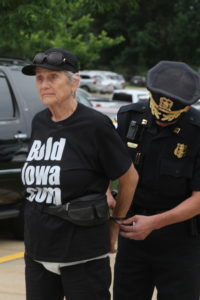 “We risked arrest because it’s important to capture the attention of politicians, the press, and the public,” said Bold Iowa director Ed Fallon. “We wanted to emphasize to those gathered at the fundraiser that climate change threatens our very survival, and a president who denies the problem — whose policies in fact greatly exacerbate the threat — must be called out and challenged.”

“This was a difficult action to plan and implement, and yes, it was a little embarrassing, too, to wear a diaper in public,” said Kathy Byrnes, a grandmother of three who lived on the route of the Dakota Access Pipeline. “While we would have preferred to share our message with the President’s audience and not be arrested, our upcoming trial is an important opportunity to prove that non-violent action in defense of our very survival is justified.”

Bold Iowa feels that its action was justified because of the climate emergency. Participants felt called to act in the interest of present and future generations and the planet. Iowa scientists and the Iowa DNR have warned for years about the harm being done because of our dependence on fossil fuels. Earlier this year, the Iowa Supreme Court stated in its ruling in Puntenney vs the Iowa Utilities Board (the Dakota Access Pipeline case), “We recognize that a serious and warranted concern about climate change underlies some of the opposition to the Dakota Access pipeline.”

Bold Iowa’s mission is to build rural-urban coalitions to (1) fight climate change, (2) prevent the abuse of eminent domain, (3) protect Iowa’s soil, air, and water, (4) defend the rights of farmers, landowners, and Indigenous communities, and (5) promote non-industrial renewable energy. Since January of 2019, over 250 Bold Iowans have bird-dogged the presidential candidates on the climate crisis.