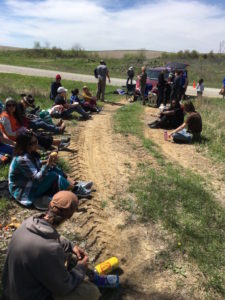 On a break during the opening 12.8-mile march.

Today saw three notable “firsts,” none of them good. Our troupe of 25-30 marchers were flipped off three times by passing drivers. I’ve walked 700 miles along Iowa’s highways and gravel roads and never had someone do that to me.

Also today, as we were taking a break on a gravel road, I walked a short distance across a field to talk with a young farmer who was watching us. I introduced myself, explained what we were doing. He made it clear he just wanted us gone and wasn’t interested in talking. As I was walking away, another man, presumably the guy’s father came charging out of the house, yelled at me to get off his property and said, “Just because you had a conversation doesn’t mean you’re invited to dinner.” 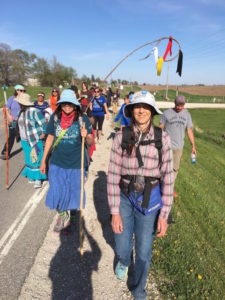 Finally, as Sarah Spain was setting up camp at the City Park in Deep River hours before the marchers would arrive, a neighbor parked a red jeep at the edge of the park. The jeep flew a large American flag alongside a Confederate flag, and two intimidating men sat in the jeep glaring at Sarah and the camp. That afternoon and again while we starting to dose off for the night in our tents, we heard several loud, close gun shots.

Iowa is my home, and has been since 1984. At times today, I didn’t recognize her. For the first time ever, I felt threatened in a land that has always been welcoming and friendly. What gives?

Perhaps the intensely partisan and acrimonious political climate has something to do with it. But as I discussed these incidents with other marchers, many who are Native American and Hispanic, it seemed likely that the hostility toward us was less about politics and more about race. 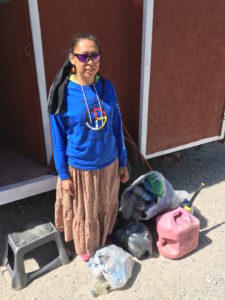 Donnielle Wanatee and other marchers collected more than a dozen bags of trash along the highway.

Yesterday, a Deep River resident posted a hateful, inflammatory video blasting Little Creek Camp, the Indigenous Iowa encampment where we started the march. The video is called “#IowaBeware” and is loaded with misinformation. It’s so lopsided it makes Fox News look fair and balanced. Check it out here and see what you think.

In preparing for our overnight visit to Deep River, Sarah and I had talked with the Mayor and another community leader, both very nice gentlemen, very accommodating. We honestly didn’t see this coming. And we expected and hoped that folks from the town would visit us at the park, share supper, engage in conversation. Our only visitor was a wonderful woman named Vicky from a nearby town, who heard about the march, called me and came by. Hers is the face and attitude of the Iowa I love.

Today’s experiences were an anomaly. The unpleasant people we met aren’t the norm. They aren’t “Iowa Nice,” and indeed we were greeted today by a lot more friendly waves than middle fingers. When we leave Deep River tomorrow, I’m ready to put the day’s negative energy behind us, and do my part to encourage dialogue, understanding and unity.