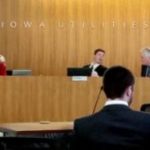 Since June, Dakota Access has been pressuring the Iowa Utilities Board (IUB) to allow it to double the flow of oil through the Dakota Access Pipeline. To its credit, the IUB has refused to be pushed or rushed. In September, IUB members Geri Huser and Nick Wagner voted to require Dakota Access to file an amendment to its permit. Meanwhile in other states, Big Oil continues to push hard for legislation to punish peaceful, non-violent pipeline protesters. Last year's fight at the Iowa Statehouse recently garnered some attention in Wisconsin, where our coalition with labor has not gone unnoticed.
This article featured our favorite agitator-in-chief, Ed Fallon, talking about the latest pipeline protest laws and how the labor unions are now worried about what these prospective laws mean for ALL protesters, including members of labor unions. Excerpt from Urban Milwaukee: Ed Fallon, a former Iowa legislator who now heads an environmental advocacy organization called Bold Iowa that focuses on combating climate change, says that his organization and the union have often found themselves on opposite sides where the pipeline project was concerned. The project, Continue reading →

Climate Activist and Bird Dog Miriam Kashia of 100 Grannies for a Livable Future was featured on MSNBC! Included was brief footage of her arrest from Bold Iowa’s June 11 action.  Support Miriam at the trial and press conference on October 10. Continue reading →
Over 11,000 people and eighteen presidential candidates are expected to attend Saturday's Polk County Steak Fry. We plan to bird-dog every politician there on one or more aspects of the climate crisis, and to make a strong showing for climate action before local, national, and international media, too. If you're coming and would like to help, let us know ASAP. 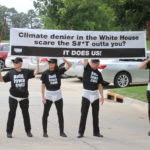 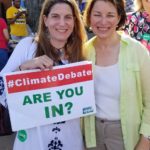 Dear Friends, With human survival on the line, we all need to be as fully engaged as possible. There’s just no way to sugar-coat it: Earth’s climate news is not good, especially up North: Wildfires burned across the Arctic last month. Anchorage recorded a record-high temperature of 90 degrees. Greenland is seeing unprecedented ice melt. It’s easy to feel despair, but we can’t give up. The stakes are too high. Now more than ever, we need climate action at both the personal and political levels. Continue reading →
Dear Friends, Last week, Bold Iowa achieved a small victory in regard to the Dakota Access Pipeline. Dakota Access wants to drastically increase the flow of oil across Iowa — from 570,000 barrels per day to 1.1 million! The carbon emissions from this increased capacity would be the equivalent of thirty coal-fired power plants. Our planet simply can’t take any more. The only path to sanity and survival is to leave the oil in the ground and quickly reduce our fossil-fuel consumption to net zero. Continue reading →
“Dakota Access’s proposal raises so many unanswered questions it is not possible for Bold Iowa, the general public, the IUB, nor concerned state and local elected officials to fully grasp the impact of the proposed expansion without adequate time and study. The involvement of landowners along the route, Story County residents, and all Iowans concerned about the broader impacts of the pipeline is essential. Thus, Bold Iowa requests that the IUB hold a public hearing in Story County where DA officials and IUB representatives are available to answer any and all questions from Iowans who have concerns about DA’s proposed expansion.”