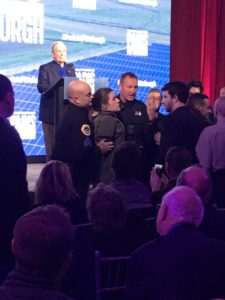 Protesters interrupt Michael Bloomberg’s speech before the Des Moines premier of his film, Paris to Pittsburgh.

Ed writes, “Protesters interrupted the start of the event, and while one of their concerns seemed to be Bloomberg’s support for fracking, it was a very confusing message.

“We viewed the film, Paris to Pittsburgh.  It was excellent, laying out the urgency of climate change and proposing solutions. Afterwards, one of Mr. Bloomberg’s staff persons came up to talk with us. When she learned that I had walked across the country for climate action, she insisted we come talk with Mr. Bloomberg.

“After a few minutes of casual conversation, Kathy shared with Bloomberg our opposition to the Dakota Access Pipeline. He responded, ‘What’s the big deal? It’s underground.’ Then he quickly moved on to talk with other attendees. It’s hard to fathom such a disconnect.

Bloomberg has since decided not to run for president. We’re ok with that.”